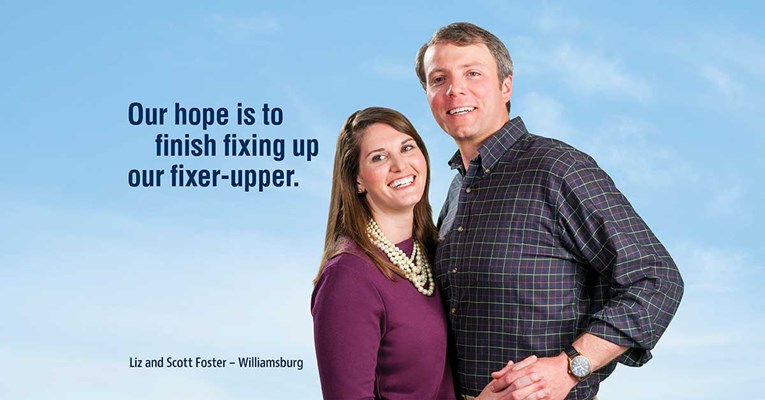 Williamsburg, It's All About Community, Customer Testimonials

“You could say Chesapeake Bank is responsible for our marriage!” Liz jokes, thinking back to her first encounter with Scott, who is now her husband.

Scott Foster grew up in Highland County in Western Virginia, which is the least populous county in Virginia. Liz lived about an hour away in Harrisonburg. Her parents have a second home in the Northern Neck. Liz and Scott first met as teenagers when they both attended an environmental science summer governor’s school at James Madison University. After graduation, Scott went to the College of William & Mary, and Liz enrolled at the University of Virginia. The relationship barometer changed when Liz invited Scott to Charlottesville in 2011 for the W&M versus U.Va. game. “I was hoping for Tribe win, but it’s probably better that they didn’t,” laughed Scott.

“Scott took me to a Chesapeake Bank Football Tailgate in Williamsburg soon after we started dating. We had so much fun. I was hooked on Williamsburg and Scott!” Liz and Scott got married in the Wren Chapel at W&M in 2016.

Liz earned her Master’s Degree in Higher Education Administration from W&M and is now employed by William & Mary as an alumni engagement professional. Scott was elected to the City Council of Williamsburg while still an undergrad student at W&M — a first in Virginia. He took a year off between undergrad and law school. He joined a local Williamsburg firm as a small business and real estate attorney while also serving his second term on City Council. Scott’s second term on City Council will end June 30th.

Liz and Scott looked at several banks when they decided to purchase their first home in Williamsburg. “We knew we wanted to use a local bank for our mortgage. It was important to us to choose a bank where we could talk to someone if we had a question or a concern,” says Liz. ”Scott knew the folks at Chesapeake Bank because he often worked with them through his law practice and through their involvement in various community organizations.”

“Once we put a house under contract, we got quotes from three different banks,” says Scott. “Not only did Chesapeake Bank offer us the best rate and lowest closing costs, but they actually service their mortgage loans. We choose Chesapeake Bank.”

“Our home is a mid-century fixer-upper,” says Liz. “But with a home equity line from Chesapeake Bank, we’ve turned our home into a gathering place for family and friends during the holidays and football season.”

Now what about you? Are you ready to celebrate your new home with your loved ones? Call now to speak to one of our Lending Officers at 877-436-9032.