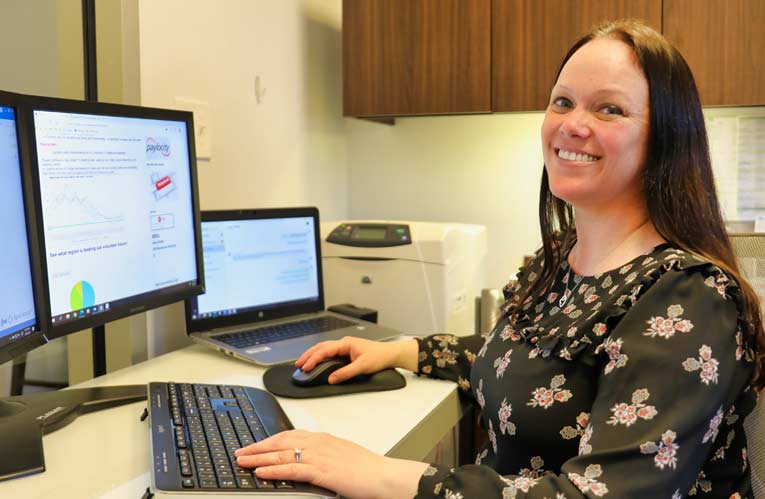 Erin Johnston works at Chesapeake Payment Systems (CPS) as a Direct Program Manager. This means she helps customers find the best in-person and online payment processing solutions available. Helping people improve their business is part of what makes Erin enjoy working at Chesapeake Bank so much.

Erin started out at Virginia Tech, where she thought she wanted to work at a hotel or manage a restaurant. She studied Hospitality and Tourism Management, and promptly found work in her field.

“But then I realized that I wanted to go to bed at a decent hour,” said Erin.

She found a job at a regional bank, where she liked helping customers meet their financial goals. Erin liked the hours and the challenge that she faced in the world of finance. She still wasn’t completely happy.

“I became a branch manager, and then got promoted again,” said Erin. “And I hated it.”

WATCH: Erin and other employees talk about what it’s like to work at Chesapeake Bank

She asked a friend for advice about working at a community bank. The friend said he knew someone who could explain what the difference was between a large national bank, and a community focused bank. That person was Sam Poole, who is now a Regional Vice President of Chesapeake Bank in the Richmond market.

Sam told Erin that the real difference between the two kinds of banking was how customers are treated, and where the money ends up. With a large bank, the customer is a number, and their money is usually sent to New York or other large financial centers across the nation.

A community bank was created to be a facilitator in the area which they operate. Instead of sending their customers’ money to New York, they keep the funds in the local area. Then the money is circulated locally, which helps support small business and the community in general.

He also told her that the way people are treated at a community bank was different too. Instead of being “just a number,” customers at smaller banks are viewed as valued partners. Community banks make a point to get to know the customer and help them achieve their goals.

This is exactly the type of environment that Erin wanted to be a part of.

“At the big bank I worked at, we did one-off gestures like naming a ball field,” said Erin. “But that’s not what makes a community thrive.”

“For us, we support a variety of non-profits in our area, all of which who really need our help,” said Erin. “That is part of how we look into the intricacies of a community and find the best way to support them — financially and through volunteerism.”

After some time as a Business Development Officer, a position opened up with Chesapeake Payment Systems, and she jumped at the chance to move into a new kind of financial business. This was a great move, said Erin, because she was able to continue to learn and grow, but remain under the Chesapeake Bank umbrella.

“I came over as a Strategic Account Manager,” said Erin. “My job was to form relationships and bonds with new and existing customers. From there, I started managing customer service of our direct merchant portfolio as well.”

Erin got a promotion recently to Direct Program Manager, which means that she works with merchant processing customers who directly process a variety of payments with CPS.

“It’s always changing and I’m always learning,” said Erin. “Banking is great — I love banking. But payments is such a different industry, and it’s so dynamic.”

The environment that Erin thrives in spreads into what she does in her free time. Since her passion is helping people grow their business, it should be no surprise on how she spends her free time. Erin is a board member for The Arc of Greater Williamsburg, which is an organization that helps adults with developmental disabilities.

A few years back, Erin participated in a 5k race which CPS, Chesapeake Bank, and Chesapeake Wealth Management sponsor each year. After the race, Erin met some of the folks who work at The Arc and some of the adult clients who use their services.

“I met their clients at that first 5k and got to talking [to the executive director],” said Erin. “Once you meet the group, it’s impossible not to love them. I got so vested after that experience and I had to be a part of it.”

It’s a good thing that Erin enjoys change. She’s a new mother, and her CPS team is preparing to move into a new building in the Norge area of James City County. When Erin reflected on the past year, she stopped to highlight how her coworkers took care of her when she was pregnant, and how they welcomed her back after her leave.

“Everyone here was so excited for me,” said Erin. “When I was out, [my coworkers] would call but not tell me anything about work. They wanted me to bond with Finley in those 12 weeks. They really did feel make me feel like family.”