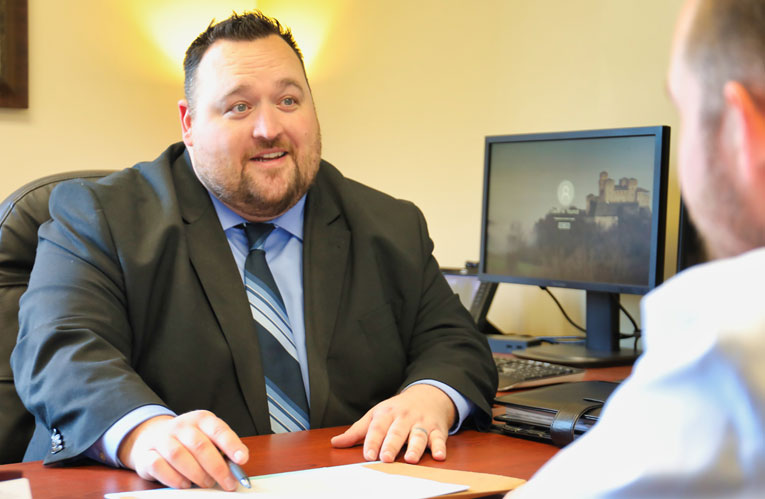 Meet David Younce: A Business Banker for Richmond and Chesterfield

Growing up, David Younce admired his father. David’s dad was in the Marines and then worked for Disney. In both roles, his father had to use creative skills and practical smarts to figure out complex problems.

Sometimes those problems involved aircraft all over the world or figuring out how to carve animal figures into a gigantic fake tree in Orlando. Either way, David’s dad made the right moves to help push his vehicles (or entertainment company) in the right direction.

Today, 30 years later, David does the same sort of thing, only instead of wearing a helmet or mouse ears, he wears a suit and tie. David works for Chesapeake Bank in the Richmond and Chesterfield regions as a Business Banker.

His goal in this position is to try to find creative ways to better serve his small business customer. David finds out what the business is up against, and he puts together a plan to help them achieve their goals.

He didn’t set out to be a “banker.” While he was in college, he worked at Sears department stores. For anyone younger than 40 years old, Sears was the Amazon of its day. Anything a person needed could be ordered through the Sears catalog, like a printed version of a website.

WATCH: David and other employees talk about what it’s like to work at Chesapeake Bank

“Sometimes when people order things online, you are just getting a picture of what you ordered,” says David. He notes that there isn’t a lot of trust in transactions in the modern economy.

When he switched from working in retail to working in a bank, it was a huge culture shock at first. He thought he was still expected to lock up the “store.” That meant emptying the wastebaskets, running the vacuum, and clean the bathrooms, as he did at the department store. It took him a while to realize that working at a bank branch was a little bit different.

David’s father encouraged him to work in banking but warned him that things would be different.

“He said that if there was a dollar missing, they’d really come down on me,” David remembers. “He also said that ‘you can’t make mistakes working for a bank.’ I found out that this is not true. You can make mistakes, as everyone does. Just so long as you learn from them.”

He toiled away at banks here and there but always heard that things were better at Chesapeake Bank. He will tell you that even though he’s worked here for about three years, he’d been trying to work here for five. The reasons why Chesapeake Bank has such an excellent reputation in the industry became quite apparent after David had been here for just a few weeks.

“The focus on the employee is huge here,” he says. “From the top down. When I have a conversation with my manager, it starts with ‘how is your family and how are you?’”

“I hear from my manager when things are going well,” says David. “I think that’s key. In the past, it was always that the manager was busy, and they had their own goals, and they are addressing things when it’s not going well.”

David can work with a variety of different kinds of businesses throughout Richmond and now in Chesterfield. Some of his favorite experiences reflect his willingness to work through a situation with a customer and figure out how to help them grow.

Through his involvement with Chesterfield based BizWorks, a non-profit helping businesses,  he’s been able to meet new small business owners.“There’s a very collaborative and growing environment in Chesterfield,” says David. “That is why I am excited to work there.”

David says that he is hopeful that with COVID receding, things will get back to what they used to be, and he can meet with bank customers face-to-face again. He also wants to get back to those old-fashioned community events in the Richmond area and in Chesterfield. This includes the annual Rockin’ on the Avenue fundraiser, which helps fund the Reinhart Guest House.

At these sorts of events, David is often asked by young people about banking as a career.  there are a few different things he says in these situations.

“Banking is a great way to build up your resume,” says David. “If you wanted to work for a large company or business in the future, getting that banking experience is just great. If you want to run your own business one day, you can learn a lot about business in the banking world.”

He also points out that “banking at Chesapeake” is different.

“As an employee of Chesapeake Bank, I know that we are taken care of really well. Then we, as employees, take outstanding care of our customers and shareholders. And you really feel that from the top down.”

LEARN MORE: Find out more about working at Chesapeake Bank and check out the positions that are currently open. 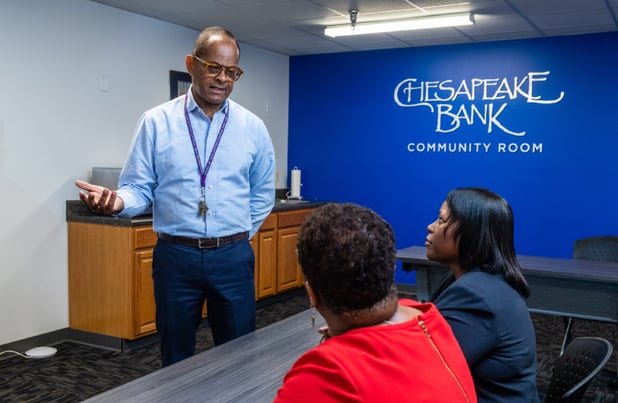 March 10, 2022
Not Just a Community Bank in Name Only
Reggie Rossignol