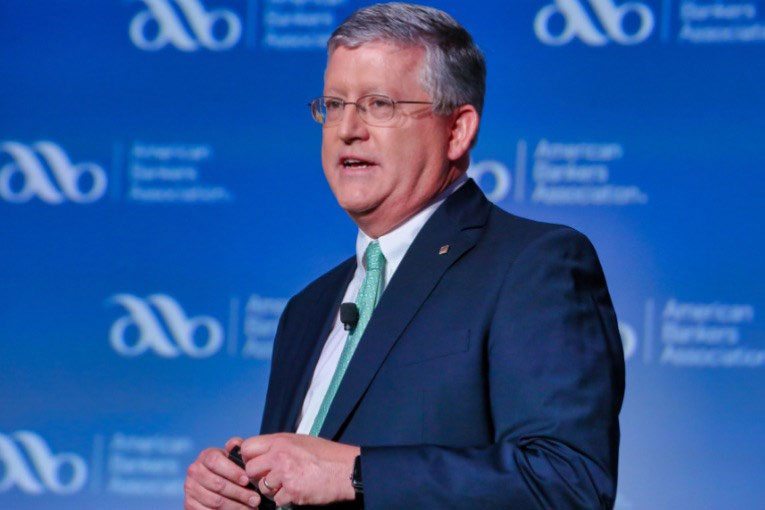 Q&A with our CEO and former ABA Chair, Jeff Szyperski

If you know Jeff Szyperski, you know that Jeff is passionate about his community on a service level, as well as business. He is quick to educate others about the role of the community bank and how the legislature affects all of us. He wants others to understand not only what is happening, but why they should get involved. That’s why it came as no surprise when he was elected Chairman for the American Bankers Association’s (ABA) 2018-2019 term.

Once the dust settled, we sat down with him for a little ‘Q & A’ about his experience and what that means for others in banking. Here is our conversation.

CB: About the American Bankers Association (ABA) – why did you want to be a part of it?

JS: When I finished chairmanship at the Virginia Bankers Association (VBA), I was already serving on a committee for the ABA. For the same reason that I think the VBA does important work, I think the ABA also does, just at a National level. There’s a lot that they do to set the framework and draw the lines in which our industry operates.

It is seminally important that we try to protect community banks. The big banks will be fine. They get beat up a lot but they have scaled in a way that they can absorb those body blows. But community banks are what service rural areas. They are the bedrock to their communities and there is a stark distinction in communities that do not have one.

To put that into perspective, consider of our little town of Kilmarnock, VA. If Chesapeake Bank was not here, you may not have Rappahannock General Hospital, Rappahannock Westminster Canterbury (RWC), or your YMCA because many of those initiatives were spearheaded by community bankers.

I also read yesterday that two-thirds of all new job growth comes from small business and community banks’ lend to small businesses.

So, back to your question about the ABA. They need to look out for all banks best interests in D.C., especially community banks, because no one is fighting that fight unless they do.

CB: Regarding the organizations that might not have been around if it weren’t for a community bank, is that a result of funding or due to the type of people that that community banks employ?

JS: Both. There is a huge funding component. In rural areas, there is also something called ‘intellectual capital.’ It takes leadership to raise $11m to build a YMCA. That doesn’t happen without someone that has a very broad range of experience and connections.

If you look at the officers of community banks, we’ve chaired most of the non-profits in our community. Not just served on the boards, we’ve chaired those boards. It is symbiotic. It’s financial, overall volunteer hours, and the caliber of people that can do those sort of things.

CB: In terms of the size of the banks that the ABA helps, does it change anything for us when we reach the $1B mark?

JS: No, The ABA helps banks of all sizes. On the ABA Board, they have one of the top officers of Bank of America, and JP Morgan Chase, along with the CEO of Fifth Third. These are the largest banks in the whole country. It runs the whole span.

CB: Can you tell us more about your responsibilities as ABA Chairman?

JS: Yes, the ABA is a multi-faceted organization. Most people think that it’s just advocacy or lobbying, but that’s only about a third of what they do. They also organize a lot of training and product endorsements for things that banks use but that they can’t vet on their own. The organization has about 360 employees. About a third to a half of those are involved in some kind of advocacy with subject matter experts.

As a board member, you want to make sure that the CEO (he or she, in this case, he) is doing their job and is communicating things effectively and getting adequate board engagement. Luckily, the ABA has an excellent CEO. The chairman and executive committee are the sounding board for him. If he’s considering a topic to present to the board, he’ll ask us for input before that meeting.

The chairman’s role is organizational, i.e., things that keep the trains running, in addition to trying to affect banking policy.

CB: Out of the gate, are you tasked with any special projects or initiatives during your term?

JS: Yes, you are the outreach and visual face of ABA (primarily) to bankers across the country. As chairman, it’s really a three-year commitment. The first year, you’re Vice-Chair, then Chair-Elect, and during the final year, Chairman, (each in lockstep with the others throughout terms).

CB: What was the most meaningful experience for you in that position?

JS: It’s not a single event. It’s more of a composite. For example, if you work for a bank, and you’re proud of it, you want to highlight all of the things that your bank has done and is doing when someone wants to learn about you.

On the ABA level, that’s how bankers are about their state and secondarily, their community. So when you go to a state, they are loaded to bear on how strong their organization is, like: all of the things that they are doing in their community, all of the things that they have before their state legislature, how they’re developing emerging leaders, women in banking, diversity equity inclusion, etc. So, you come into an event where everyone is charged up, and rightly so, it’s really uplifting. That’s the thing that’s most edifying to see: the grassroots infrastructure that’s across our entire country that is so fundamental.

CB: What would you say your biggest challenge was?

JS: Trying to keep ABA duties, business duties, and family stuff all afloat. During this term, we also had two sons get married, and we did a house renovation. We were out of our house for 17-18 months. There wasn’t a lot of recharge time. I am an extrovert but not a huge one. Wende [Jeff’s wife] is an introvert and she relished her time when she could recharge.

CB: Being Chairman is an accomplishment all by itself. Is there something that you accomplished during that time that you are particularly proud of?

JS: There are so many moving parts that I wouldn’t want to take credit for anything. The train didn’t come off of the tracks during my term. That’s good. The year before, we got a bipartisan banking bill passed, which pulled back some of Dodd-Frank regulations [this helped community banks]  But as any other ABA board member or chair would tell you, the seeds for that bill were planted the day after Dodd-Frank passed. It took a decade to get that done. Everything has such a long life span. It’s not like there are events that “just happen.”

It sounds crazy but one of my stated missions was to make sure that the emerging leaders at the national level got wings. So, during my tenure, it went from this ad hoc council to a full committee council with regular meetings. Then we continued efforts to support them. The videos that we shared earlier this year on ‘Banking as a Career’ came out of this emerging leaders project.

That happened during my year. Also, trying to get more grassroots engagement. It’s not just CEO’s influencing legislation. Every employee who considers banking as their career needs to take a vested interest in what’s going on in Washington to protect their job.

CB: What’s next for you?

JS: Oh, gosh, I think I want to take it easy for a while. I didn’t run to be chairman of the ABA. I was asked if I would consider it. So, I spoke with Mr. Monroe, senior management, the board, and of course, the first person that I asked was Wende. Everyone supported it and I am glad that I did it but I am not saying “oh my next mountain to climb is this...” I am very content right now.

CB: How do you think people perceive banking?

JS: That’s an issue that we discuss at the ABA a lot. If you look pre-crisis (2008) at industries that college graduates were going into, banking and finance were always in the top 10. Then it dropped off. Some of the larger banks also did some things that impacted that number, giving the industry a bigger black eye.

During the last four years, we’ve done a lot to promote banking as a career, nationally. Everyone hears the bad news about banks and all banks don’t do enough to toot their own horn. The #AmericasBanks initiative is our way of getting the good news about banks back out there. In the most recent rankings banking is coming back up. Colleges are putting banking degrees back into the curriculum.

CB: As a leader, do you have any rituals or practices to help you maintain sanity?

JS: One of my God-given traits is that I do find humor in everything. While everything that we deal with here is all very important and nothing to be flippant about, most things that we deal with are not life or death. I do also try to stay mentally organized.

JS: Can I tell you the people I’ve met and places that I’ve been?

CB: Is there anything else that you’d like to include?

The level of support from Senior Management and the Board was phenomenal. I never felt like I was leaving a ship adrift.