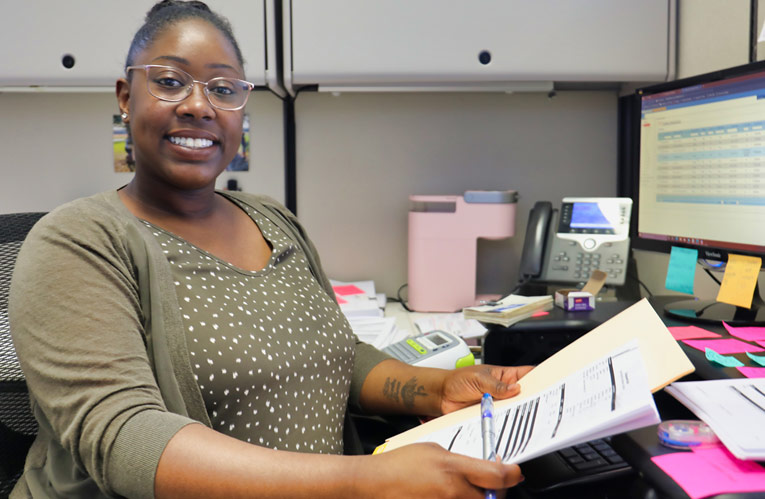 The Amazing Rise of April Clark at Chesapeake Bank

April Clark’s story at Chesapeake Bank is impressive. In just under three years, April has worked in three different positions in her short time.

Since she started just two years ago, April served as a Customer Service Associate for two branches on the Northern Neck and is currently working in a third role in Kilmarnock.

If your head is spinning because of all these job changes. Don’t worry. All of these moves are a part of April’s plan to work her way up the ranks at Chesapeake Bank.

“My duty [in this role] is to actually formulate new, renewed, and modified loan documents to be sent out for customers to sign,” says April of her new role as Commercial and Consumer Loan Processor.

“I work side-by-side with [coworker] Tekeya Baker, and it is our job to start the documents,” says April. “We are the ones that the loan officers send the requests to. They tell us that the borrower is looking to do this particular loan.

For those of us who are not familiar with what a “Commercial and Consumer Loan Processor” does, there is a story that April uses to explain how what she does fits in.

“[Say a business is] looking to purchase an office space to expand their business,” April says. “The loan officer will sit with their assistant and start preparing a summary packet, that in turn, gets sent to us and gives us a synopsis of what the borrower is looking to do and when it needs to be completed by. For example, the borrower would like a loan in the amount of $250,000.00 and are looking to come in on this Thursday to sign the documents and close out their loan.”

WATCH: April and other employees talk about what it’s like to work at Chesapeake Bank

“It is our job based on the information that the loan officer sends to put those documents together and have them sent out,” she explains. “Then, the loan officer can sit with their client and close on that Thursday.”

From there, the signed document packet is passed to four other co-workers of the commercial and consumer loan department to complete the loan process. For April, working as a Commercial and Consumer Loan Processor is step 3 of her plan to eventually become a Mortgage Loan Underwriter.

She will admit that starting out in the job market, banking was not on her radar. April originally wanted to get into healthcare.

“I wanted to go into the medical field to be an anesthesiologist, with a specialization in pediatrics,” says April. Things changed for her when she started working at the bank.

“When I was living in Pennsylvania, I took a job as a teller at one of the banks up there and actually fell in love with working in finance,” says April.

When she returned to the Northern Neck, she found a spot in the Irvington Branch and started looking to her future.

“We have a mentor program here, and Sherry Vanlandingham was my mentor,” says April. “We talked about different things, and she asked me about my goals.”

Vanlandingham is the Deposit Operations Manager for Chesapeake Bank and was able to help guide April through possible career paths. They finally agreed that ‘underwriting’ would be April’s focus.

“I notified Sherry that this would be something that I would be into,” says April. Vanlandingham worked with other leaders at the bank to let them know that April wanted to be considered the next time there was an opening in loan processing.

“Underwriting is a broader step to what I am doing now.,” says April. “With underwriting, you’re responsible for reviewing the applications and deciding on its approval or rejection by reviewing the documents that were submitted. Then you ensure that they are following the federal guidelines as well as the guidelines of the bank.”

Since April is in her 20s, she could switch careers and move her husband and daughter anywhere. But the Northern Neck is her home, and she says that the world of finance was — and is — extremely attractive to her.

“A lot of things now … they come up so fast, and they happen so fast that they come and they go,” says April. “I feel like the world will always need financing. The way that we do finance is ever-changing, but the core principles of financing are not going anywhere.”

“When I first got started, I didn’t know there were so many things that you could do in the banking industry,” says April. “From the outside looking in, you don’t realize that you have your people who are on the forefront who you see every day who do all the transactions. But there is a whole team and network behind those people who make those transactions happen every day.”

April says that working in banking is a smart move for her, but working at Chesapeake Bank is special.

“If somebody wants to come in and work here, they will know that you have a team of people who really care about what goals you want to achieve,” says April. In larger businesses, sometimes you get lost in the shuffle.”

“I feel like everyone here does a great job at making sure that your experience here is personal. It’s not just you come to work here every day and do your job, and you go home. From the moment you step into the door, you develop a sense of security and family when you work at Chesapeake Bank.” 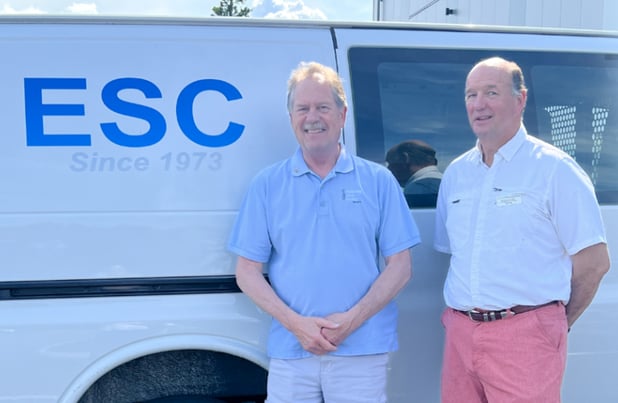